Yikes, it's been more than three years since my last post!

The thesis? It got finished. The degree was awarded, and so all the hard work resulted in something. If you're so inclined, you can read the thesis in its entirety here.

I've been busy making my way in the working world (happily, in the heritage sector), and while barns faded into the background, I never lost my passion for them. I may not be actively barn hunting any more, but you can bet that I still take the time to admire a good barn in my travels, and once in awhile people still contact me with tales of their barn. Or ask me how they can get money to save them. For that last, the answer is, there aren't many places! In Saskatchewan this past year, the only granting agency specifically for built heritage in the province, the Heritage Foundation, lost its funding from the provincial government. As that organization works to restructure itself, there are very few dollars available for restoration work on buildings of any kind, particularly not the humble barn. 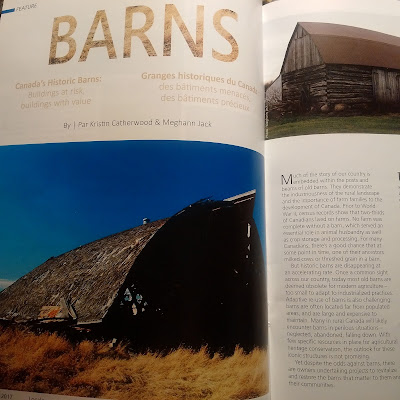 This year, after a couple of years of nothing really going on, barn-wise, I was called back to my role as barn hunter. First, my good friend and fellow barn hunter Meghann Jack and I wrote an article for Locale - the magazine of the National Trust for Canada. Secondly, and in connection to the first, I was invited to speak about the plight of barns at the National Trust For Canada's annual joint conference in Ottawa. My talk, "What Are We Going to do About Barns?"part of a larger panel about conservation efforts around the world, was well attended, and I had some very fruitful discussions afterward. The National Trust recognizes that barns are endangered across the country, but what will come of that understanding remains to be seen.

And what about the barns themselves? Well. Most of them are still standing, but we've lost a few. In fact, this was the main point I made in my presentation in Ottawa. Since my survey in 2013 in which I identified 123 existing barns in my study area, I know of at least six that have fallen down or been taken down. There very well may be more that have been lost, since I haven't gone back over the entire survey region. You can imagine that at this rate, it won't take long before there are hardly any barns left at all.

However, with the bad news, there is also good. In the Locale article, I featured two barn success stories from my area. The first, the Carles barn, has undergone a multi-year conservation process. And the Levee barn just had its first season in its new iteration as a Christmas tree store. Barns will only survive if people make a concentrated effort to save them. 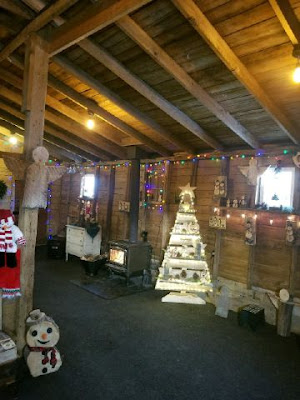 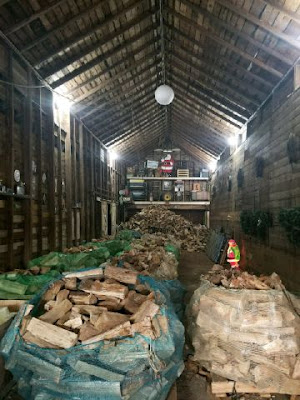 Case in point -  "my" own barn - the barn which is part of a farm my dad purchased in the 1970s known as the Sidehill. Built in the late 1940s, the barn is one of the newest in the area built in the old gambrel-roofed style. It is also distinctive in that it is a bank barn - built into the side of a hill. My dad had it painted in 1980, but since then it has simply weathered the elements. It's in okay shape, but it needs work. And so, I figured I better put my money where my mouth is, and have decided to take on the responsibility and expense of ensuring that work gets done. Rather than tinning the roof, I want to shingle it with its original cedar shingles, paint it, and shore up a concrete wall. With this work done, hopefully the barn will stand for a long time yet.

And with that, I sign off once again. I'll keep this blog up as a record of the work I did, and will update it if I have further news to share. In the meantime, wishing you and yours a joyful holiday season!
Posted by Kristin at 15:38 3 comments: